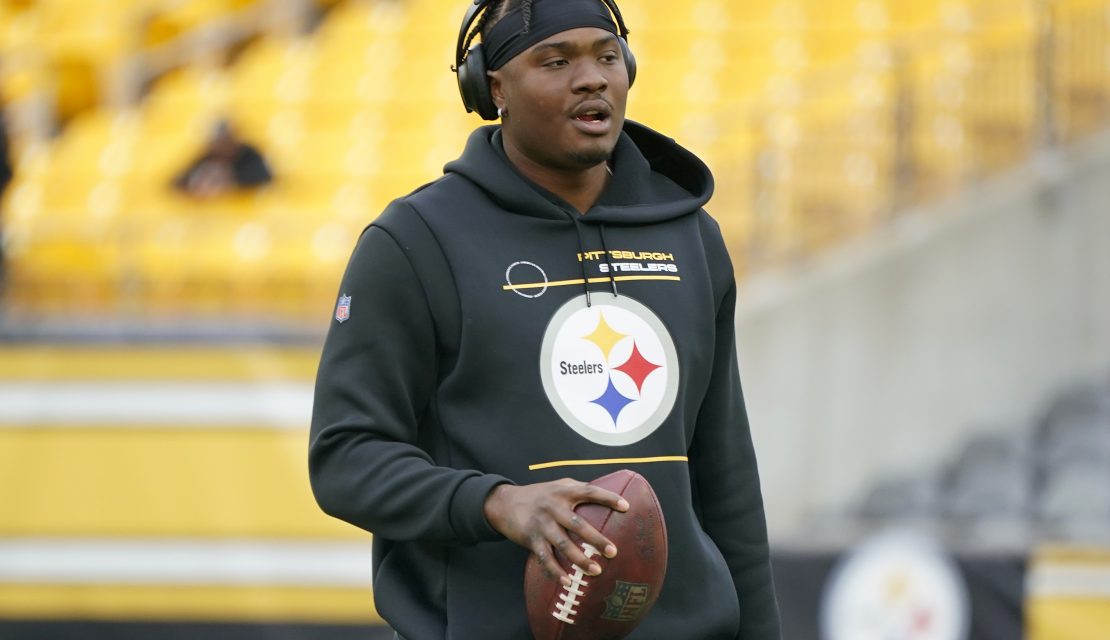 Dwayne Haskins is a football quarterback playing for the Pittsburgh Steelers in the National Football League (NFL). The 24-year-old American athlete is known for his historic 50 touchdowns in 2018 and controversial release from Washington Redskins. In his young career, Dwayne Haskins net worth is estimated to be around $3 million.

Below, we explored Haskins’ career, personal life, net worth, and other information that many fans are asking for.

Dwayne Haskins is a professional NFL player who hails from Highland Park, New Jersey, and was born on May 3, 1997. His parents are Dwayne Haskins Sr. and Tamara Haskins. When he is in ninth grade, his family decided to move to Potomac, Maryland.

Growing up, Haskins carry the nickname ‘Simba’ as inspired by the movie Lion King. It’s because of Haskins’ afro hair that reminds his mother of a lion’s mane. He still goes by this nickname and has even incorporated it into his brand and clothing line.

However, in July, Kalabrya Gondrezick was arrested after allegedly assaulting Haskins. The incident happened inside a Las Vegas hotel room, where Gondrezick reportedly punched his husband in the face.

Gondrezick inflicted mouth injuries to Haskins and the latter was needed to be brought to a hospital. The conflict started when Haskins and his friends failed to wait for Gondrezick’s group before going to a nightclub.

Dwayne Haskins initially planned to play for the University of Maryland. Eventually, the quarterback decided to commit to Ohio State after Randy Edsall, Maryland coach, was fired in the middle of the season.

During his first year playing for Ohio State, Haskins finished with 40/57 passes as well as 4 touchdowns. In his sophomore year in 2018, Haskins set a record after 50 touchdowns and exceeding the 4,000-yards mark.

Haskins was able to throw five touchdowns during the 2018 Big Ten Football Championship Game and three on the 2019 Rose Bowl. For both events, Haskins won the Most Valuable Player (MVP) award. This is aside from the Ohio State Athlete of the Year award his team received.

Due to his exemplary performance in Ohio State, Haskins became a semifinalist for the Maxwell Award.

Come January 2019, Dwayne Haskins announced that he will forego the last two years of his stay in Ohio State. He then entered the 2019 NFL draft, where he was drafted by the Washington Redskins. He ranked 15th in the entire drafting season.

During his stint with the Redskins, Haskins was given permission to wear jersey number 7. This is the same jersey number of quarterback Joe Theismann. Haskins went on to become one of Redskins’ team captains.

Moreover, Haskins officially signed a four-year contract with the Redskins in May 2019. This contract is worth $14.37 million, inclusive of an $8.47 million signing bonus.

However, in October 2020, Haskins was fined by the team when he broke the league’s protocol after making a reservation in the team hotel for a family friend.

Consequently, Haskins was photographed attending a birthday party without wearing a face mask. After violating the league’s COVID protocols, Haskins was fined another $40,000 and he lost his standing as captain.

Shortly after this second offense, Haskins was released by Washington Redskins due to poor decisions and declining performance on the field.

Nevertheless, Dwayne Haskins was immediately signed by the Pittsburgh Steelers in January 2021. He signed a 1-year contract, which reportedly costs $850,000.

Currently, Dwayne Haskins is said to be worth $3 million. Despite the fines he paid to NFL, Haskins’ wealth remains sizeable. Also, his net worth is expected to balloon, thanks to his lucrative football career.

Although Haskins has been let go by the Redskins, it turns out that the team still has to pay him a portion of what’s left on the contract.

Most of Haskins’ money came from the $8.5 million signing bonus he got after being drafted by Washington Redskins. However, since NFL has a salary cap, the signing bonus will be given in piecemeal through a specific period of time.

This means that Redskins is still paying Haskins his signing bonus even if he’s no longer part of the team. So far, the NFL team has already given 60% of the signing bonus as part of the contract. The remaining balance is subject to NFL parlance after Haskins got signed to Steelers.

On the other hand, Haskins’ contract with the Steelers has no guarantee. Nevertheless, since he’s still receiving payments from Redskins, the footballer is far from going broke.

So far, Dwayne Haskins gets his money from his football career. He doesn’t have any other job recorded to this day.

Q: How did Dwayne Haskins spend his first paycheck from Washington Redskins?

A: After being drafted and signed by the Washington Redskins, Haskins received an $8.5 million signing bonus. The quarterback reportedly spent his first million on a house and a Bentley Bentayga. Haskins also told GQ Sports that he saved most of his first paycheck.

Q: How much was guaranteed on Dwayne Haskins’ salary?

A: When Haskins signed with Washington Redskins, he has a guaranteed $14 million paycheck. The team is still paying him the amount owed even after being let go. In comparison, Haskins didn’t receive any guarantee from Pittsburgh Steelers where he’s currently playing.

Q: Why did Washington cut Haskins?

A: Washington Redskins sever ties with Dwayne Haskins after an upsetting Week 16 performance. Haskins also violated the league’s COVID protocols twice, which likely contributed to the decision. With, this, Haskins became the first NFL quarterback in 20 years to be released in the middle of a season.

Q: How good of a quarterback is Dwayne Haskins?

A: Dwayne Haskins has an exemplary performance on the field, at least before his weak output before parting with Washington. Overall, Haskins was able to complete 104 out of 152 passes in 2020.

Dwayne Haskins’ net worth is expected to get bigger as he got a new lease on his career with Pittsburgh Steelers. This is aside from the guarantees he still enjoys from Washington Redskins. Currently, his $3 million fortune is continuously growing despite a lack of guarantees on his new team.