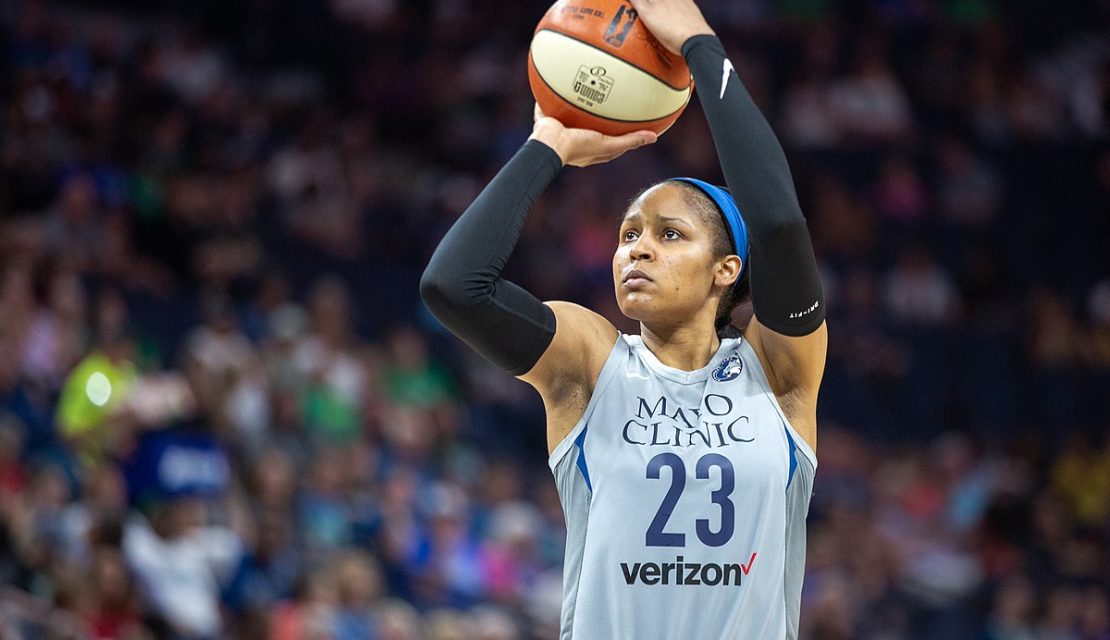 Maya Moore is a professional basketball player. She’s playing for the Minnesota Lynx under the Women’s National Basketball Association (WNBA). Moore is a decorated athlete and is also known for his advocacy for social justice. With her successful career, many are asking, how much is Maya Moore worth?

According to available data, Maya Moore has a humble net worth of $300,000. She sources most of her wealth through her professional basketball career.

Who is Maya Moore?

Maya April Moore was born on June 11, 1989, in Jefferson City, Missouri. Her parents are Kathryn Moore and Michael Dabney. Maya has two half-siblings, Ashley Dabney and Olivia Dabney who also dabbled in sports.

It seems like basketball is destined for Maya. At the age of three, she started playing on a hoop her mother mounted at the back door of their apartment. From there, Maya’s passion for basketball grew from being simply a pastime into a full-time sport.

As a child, Maya Moore attended Moreau Heights Elementary School. After that, she went to Collins Hill High School in Georgia. As expected, Maya joined the Collins Hill Eagles Women’s Basketball Team. During her stint, Maya recorded an impressive 125-3 record.

Due to her performance, Maya Moore was awarded 2007 Miss Georgia Basketball and as a 3-time Georgia Player of the Year.

Aside from her love of basketball, Maya Moore also competed in track and field. This is the same sport that her sister Ashley pursued.

After high school, Moore decided to play for the University of Connecticut. During her stay in the university, Moore was only the second collegiate player to be awarded the Naismith Prep Player of the Year. She also received more accolades because of her excellent performance on the court.

Maya Moore married Jonathan Irons in September 2020. But before the two tied the knot, Irons was convicted of burglary and assault with a 50-year sentence. He served his sentence from 1998 to 2020. With this, Moore met him on a prison ministry program back in 2007 and the two kept in touch.

Moreover, Moore took a break from her basketball career to helping free her husband. A judge overturned the 1998 decision due to ‘circumstantial and very weak’ evidence. As of now, the two don’t have a child yet.

Currently, Moore is on a sabbatical from her basketball career to focus on her advocacy of pushing criminal justice reform.

Maya Moore is as successful in her advocacy as she is on the court. Her basketball career is so celebrated that she received honors at the White house 5 times. She also won a gold medal with the Team USA during the 2012 London Olympics.

Moreover, Moore’s high school and college basketball career is decorated with championships and recognitions. In 2011, she was chosen as the #1 pick during the WNBA Draft and was signed to Minnesota Lynx.

True to her collegiate career, Moore was awarded as the WNBA Rookie of the Month for July 2011 and August 2011. She also played at the WNBA All-Star Game in the same year. Ultimately, Moore won the prized Rookie of the Year award.

If that’s not enough, Maya Moore was the only second player in the league to win both a WNBA championship and Rookie of the Year in the same year.

Her streak in the WNBA continued after re-signing with Minnesota Lynx. She then won the WNBA MVP during the 2015 season. In the same year, Lynx reached the Western Conference Finals and won their third championship in just five years.

From 2016 to 2018, Moore continued to play for Lynx. While the team lost to Los Angeles Sparks in 2017, they reclaimed their victory in 2017 after defeating Sparks.

However, in 2019, Maya Moore announced that she will go on sabbatical to focus on ministry work. This includes fighting for the release of her husband, Jonathan, which was a success. Aside from WNBA games, Moore also missed the 2020 Tokyo Olympic Games.

How much is Maya Moore worth?

Currently, Maya Moore has a net worth of around $300,000. A large portion of her wealth came from her salary as a professional basketball player. According to reports, Moore has an average annual salary of $58,500.

Aside from her basketball earnings, Maya Moore also receives income from her endorsements. In 2011, the cager signed a deal with the Jordan Brand, which is under Nike. It’s worth around $3 million according to sources. Moreover, Moore also has deals with United Way, Pepsi Max, and United Airlines.

However, since Moore decided to sit out the upcoming basketball seasons, her net worth may likely experience a decline. It’s not yet known when she plans to go back to the court.

Q: Is Maya Moore in the Hall of Fame?

A: Maya Moore was recently inducted as one of the Georgia Sports Hall of Famers: Class of 2021. She is joined by other inductees, including Tom Glavine, Tony Barnhart, Brian Jordan, Janet Harris, Ray Lamb, and Matt Stinchcomb.

Q: What year did Maya Moore become Rookie of the Year?

A: Maya Moore was awarded Rookie of the Year in 2011. This is during her very first of playing after being drafted to Minnesota Lynx. It’s also just 5 months after Moore graduated from college, which is no mean feat.

Q: What is Maya Moore most known for?

A: Maya Moore is most known for her part in winning Lynx its four WNBA Championships from 2011 to 2017. She also won numerous MVP awards, two Olympic gold medals, and the Rookie of the Year Award on her debut in 2011.

A: Apparently, Maya Moore isn’t considered the best WNBA player. It was Diana Taurasi who the fans voted as the league’s GOAT or Greatest Of All Time. Taurasi is currently in her 19th year in the WNBA and already considering retirement. Even if she hangs her basketball shoes, Taurasi will leave an incomparable legacy.

How much is Maya Moore worth? The WNBA superstar is estimated to be worth $300,000. Most of her income comes from her basketball career aside from endorsement deals and several TV/movie projects. However, since Moore decided to take a break from the court, her net worth may experience a decline. This is much so if she decides not to go back to basketball for a long period.